Gravitational waves may be forged in the heart of the galaxy, says a new study led by PhD student Joseph Fernandez at Liverpool John Moores University. He sets out the work in a presentation on 3rd April at the European Week of Astronomy and Space Science in Liverpool. 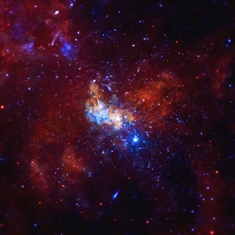 Sagittarius A*, the black hole at the centre of our own galaxy. Credit: NASA/CXC/MIT/F. Baganoff et al. Click for a full size image

Gravitational waves (GWs) are small ripples in space-time that spread throughout the universe.

When there is a change in air pressure on Earth, this change moves outwards in the form of sound waves. Analogously, when pairs of compact objects - like black holes (BHs) or neutron stars (NSs) - form binaries and rotate around one another, the gravitational field around them changes, producing GWs that also move outwards.

This phenomenon was predicted by Albert Einstein in 1915. The amplitude of these ripples was predicted to be so small that Einstein thought they would never be detected. However in 2015, a century after making the prediction, GWs were observed directly for the first time

These originated from a pair of stellar mass black holes (around 30 times the mass of the Sun each), which fell together, and eventually merged.

Since then, another four confirmed observations of GWs have been reported to originate from these systems, and with the LIGO and VIRGO improvements currently underway, we expect to see many more in the near future.

These observations show that BH mergers are commonplace in the Universe. However, we are still not sure how these sort of binary systems form. This is because they need to be on very close or very eccentric orbits in order to collapse in such a way that GWs are observable.

Fernandez and colleagues, including another PhD student Brown, have shown that the orbits of binaries can be changed by the black hole that lies in the centre of most galaxies, including our own.

A massive black hole results in very intense gravitational fields and extreme physics. If a compact binary were to have a close encounter with one, then in most cases it would be disrupted and its component BHs or stars would be separated.

However, this isn’t always the case.

Binaries can emerge from the tidal encounter undisrupted under certain conditions, with their orbits suffering severe modifications. By using Monte Carlo simulations, Fernandez has shown that surviving BH binary systems can become tight and eccentric, reducing the merging time by over a factor of 100 in 10% of cases.

This could be sufficient to force binaries that wouldn’t merge within the lifetime of the Universe to do so sooner, leading to observable gravitational waves.

This process can also flip the binary system orbital plane, making the BHs orbit in the opposite direction to their initial conditions. This can lead to negative effective spin values, which could be used to distinguish this mechanism from others.

Mr Joseph Fernandez
Liverpool John Moores University
Mob: + +44 (0)7716 138 822
This email address is being protected from spambots. You need JavaScript enabled to view it.

Sagittarius A*, the black hole at the centre of our own galaxy. Credit: NASA/CXC/MIT/F. Baganoff et al.