Gone in a (cosmological) flash: a team of astronomers found 72 very bright, but quick events in a recent survey and are still struggling to explain their origin. Miika Pursiainen of the University of Southampton will present the new results on Tuesday 3 April at the European Week of Astronomy and Space Science.

The scientists found the transients in data from the Dark Energy Survey Supernova Programme (DES-SN). This is part of a global effort to understand dark energy, a component driving an acceleration in the expansion of the Universe. DES-SN uses a large camera on a 4-metre telescope in the Cerro Tololo Inter-American Observatory (CTIO) in the Chilean Andes. The survey looks for supernovae, the explosion of massive stars at the end of their lives. A supernova explosion can briefly be as bright as a whole galaxy, made up of hundreds of billions of stars.

Pursiainen and his collaborators found the largest number of these quick events to date. Even for transient phenomena, they are very peculiar: while they have a similar maximum brightness to different types of supernovae they are visible for less time, from a week to a month. In contrast supernovae last for several months or more.

The events appear to be both hot, with temperatures from 10,000 to 30,000 degrees Celsius, and large ranging in size from several up to a hundred times the distance from Earth to Sun (the Earth is 150 million kilometres from the Sun). They also seem to be expanding and cooling as they evolve in time, as would be expected from an exploding event such as a supernova. 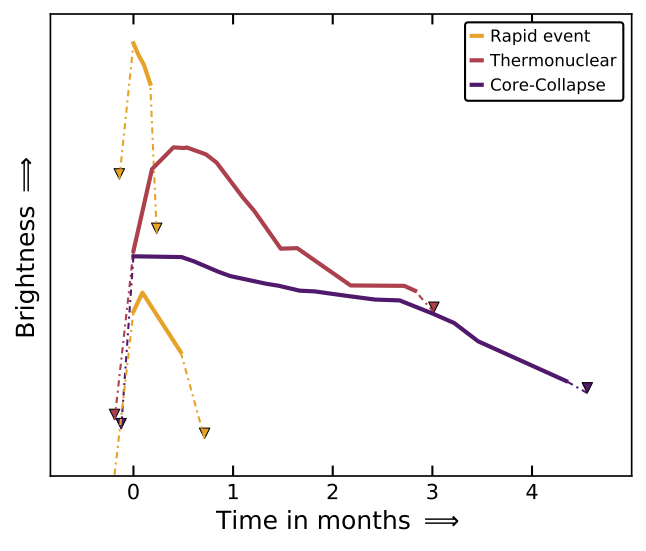 Graph showing the evolution of brightness for two quick transient events and two typical supernovae: thermonuclear and core-collapse. In thermonuclear supernovae an Earth-sized remnant (a white dwarf) of a small Sun-like star accretes a critical mass of material from a companion star and explodes. In a core-collapse supernova a massive star exhausts the fuel in its core which causes the core to collapse, triggering an explosion. Credit: M. Pursiainen / University of Southampton / DES Collaboration

There is still debate on the origin of these transients. One possible scenario is that the star sheds a lot of material before a supernova explosion, and in extreme cases could be completely enveloped by a shroud of matter. The supernova itself may then heat the surrounding material to very high temperatures. In this case astronomers see the hot cloud rather than the exploding star itself. To confirm any of this, the team will need a lot more data.

Pursiainen comments: “The DES-SN survey is there to help us understand dark energy, itself entirely unexplained. That survey then also reveals many more unexplained transients than seen before. If nothing else, our work confirms that astrophysics and cosmology are still sciences with a lot of unanswered questions!”

For the future, the team plan to continue their search for transients, and estimate how often they take place compared with more ‘routine’ supernovae.

The research project was partly funded by European Research Council grant EU/FP7-ERC no. 615929.

Mr Miika Pursiainen
University of Southampton
Mob: +44 (0)7452850905
This email address is being protected from spambots. You need JavaScript enabled to view it.

Images of one of the transient events, from 8 days before maximum brightness to 18 days afterwards. This outburst took place at a distance of 4 billion light years. Credit: M. Pursiainen / University of Southampton

Graph showing the evolution of brightness for two quick transient events and two typical supernovae: thermonuclear and core-collapse. In thermonuclear supernovae an Earth-sized remnant (a white dwarf) of a small Sun-like star accretes a critical mass of material from a companion star and explodes. In a core-collapse supernova a massive star exhausts the fuel in its core which causes the core to collapse, triggering an explosion. Credit: M. Pursiainen / University of Southampton